Another motivation milestone: the engine is in. Just the engine, no ancillaries, no gearbox, no…
Just needed to see it in there. Stay tuned for the June recap soon…

So as the shell is back home, the reassembly can finally begin. This whole process will take loads of time, as I’m stillgoing by the motto: No part will be mounted back up without touching it to make it better, newer, cleaner,…
Just out of tradition I started with the most random part possible. The first thing I saw on the shelve was the fuel filler neck, so back in it went.

Started the reassembly of the doors

I still don’t have a “plan” on how I’m going to proceed the reassembly until it’s all back together. Right now it’s a matter on what parts catches my eye, what is half way logical to mount first, and what is pleasing me that day to see mounted back on the car.
Wiring looms are 90% back in, horns are back in, pedals and master cylinders are back in…

This is it, the big one, the bodywork post. All the metalwork and some paint. Before I start, let’s just say I’m super happy I found those guys! Check out their instagram @slgclassiccars. Their work is just on another level! The whole process was very pleasant for me as a client. There were no problems, only solutions. I’ve always been updated. Got photo documentation multiple times a week! No down times, once they start the work it won’t be in the corner of the shop for weeks without any work carried out,… The finished car just blows my mind!
I highly recommend this resto shop!

So if you guys are interested in what was done to the bodyshell, the following pictures document the awesome work of SLG classiccars. Just pure craftsmanship! No repair panels / patch panels were purchased. They just created everything from scratch!
All in all, this complete process took a little over 3 months. From delivering the empty shell to the bodyshop to the day it was finished.

So even before the shell went off for media blasting the guys @ SLG started to work on it. A shitty repair job of the rear valence was redone the right way, the side marker holes were closed, the holes in the firewall for the AC lines were closed.

But the team at SLG classiccars repaired them all

And now for the big one. As it turned out, the 240Z already had one rear wheel arch replace in it’s life. Unfortunately it wasn’t 100% right and we decided to replace it. From scratch, without any repair panels, never seen this much art and craftsmanship before! Big props to tristan for pulling this off!

After all this it was time for prep and paint. Everything was done in 920 safari gold. I had got a sample from Lars K from Germany. Thanks again mate. That sample had travelled to another 240Z collector and been compared to an original paint 240Z. So I know the color is 100% right.

I chose a satin finish for the underside and the inside

COULDN’T BE ANY HAPPIER!

Well with all these pandemic things going on, it wasn’t that easy to get the shell back home to the shed. I wasn’t allowed to go to belgium to pick it up myself, so I had it delivered by a transport company.
So I could finally see it with my own eyes, the color I never saw in person before. I decided to go with safari gold just by looking at pictures of it! But I have to say, I really don’t regret it. The color is awesome, looks so different with different lighting conditions. And it has to be one of the most 70’s colors from the 240Z color chart!

Back home in good company

As the car wasn’t that nice to drive, so first thing was to remove the cut springs and replace them by some new ones of the same brand. Of course it now looks to high, imho, but it drives way better. Cut springs had no preload at all, and no real travel, as the slightest compression would let it sit on it’s bumpstopts.

I also removed the slightly worn steering wheel and fitted my Nardi ‘deep’ wich I had laying around. I’m not sure what steering wheel I’ll mount after the resto.

Ordered and mounted some Ramair filters for the DCOEs and repaired the water temp.

I sourced a non series 1 driveshaft, moustache bar and rear transverse link. This is all thats needed to change the rear drivetrain to the later geometry. While at it I also changed the diff support for a hangingt RT diffmount. No more straps or rubber bumbers for Tosbo.

In my quest to optimize the driving sensation a bit more, the car needed a rear swaybar. As it hadn’t any at all. I ordered a complete ST suspensions swaybar set from the US.

And I played with wheels, a lot 😉 Work, Rotas, Konig and JBW

Oh, and I enjoyed it a lot.

Now I’m waiting for some camber tops for the front axle and the car definately needs an upgrade in the seat department!

Apart from the alps pictures, these are my favorite shots of 2019. In no particular order. 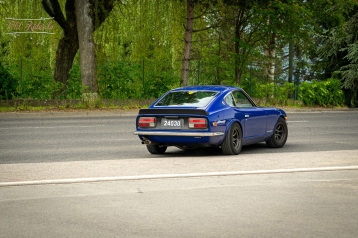 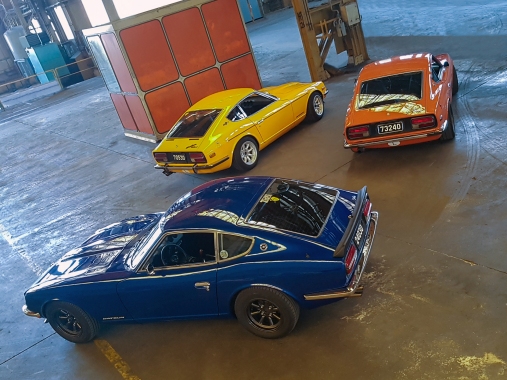 And a less scenic picture of 2020, but more on this later.