The list of parts and assemblies to freshen up seems endless!
Front suspension back together

And I decided to have some wiring fun! Over 30 hours went into my adapted and modified harness. Or shoud I say harnesses, as there are 4. I used the original harness and modified it to have relays for lights, starter,… I rewired everything related to ignition. Adpated for the use of JDM/Euro spec tail lights, got rid of the way to complicated stock hazards wiring,… In the end I drew a new wiring diagram for future diagnose,…

In the beginning there was chaos:

But in the End I’m really satisfied with my job. Crossing fingers everything will work as intended 😉

As the dash is out, I disassembled all the gauges, cleaned the up, polished the glas. Mediablasted an painted the housings, reassembled everything except for the tach. A Speedhut electronic tach with gps speedo will take the OEM units space.

Next on the list the window scraper rubbers which were all brittle and disgusting. As I didn’t want to buy the expensive chrome trim with the attached rubber scrapers I decided to give it a try and just replace the stock scrapers on my existing trim

Another upgrade over stock is a Subaru STI LSD differential with a 3.9 final drive. So I bought the diff, bought some conversion axles from datsunrestomods and refreshed the diff. New gaskets, new hardware,…

Reassembled the rear suspension and brakes

Reassembled the wiper motor after cleaning everything

Fuel filler neck has a second life too

In preparation to a road trip to the French alps which will include 23 pass roads and approx. 2400km there was the urge to do some general maintenance and updates. I planned to do a Toyota front brake caliper swap to, but the parts did not arrive on time, so I’ll have to do this upgrade later.

So after driving 500km on the newly mounted 5-speed gearbox (which I bought untested 3 years ago) I saw a small oil leak, so I replaced the rear transmission seal. While the gearbox was off, I also replaced the pilot bushing in the crankshaft as it had seen better days. Another item added to the driveline is a RT Diffmount. 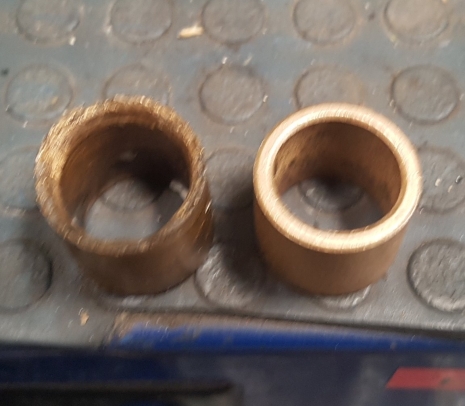 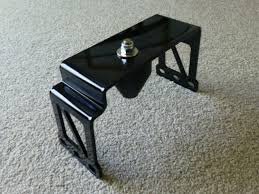 Another thing I had laying around for moths was a complete engine-back exhaust from Zstory. After quite some fiddling to get everything right and a homemade header heat shield, I mounted everything up. It’s quieter than my previous pacesetter/homemade/… exhaust but the exhaust note is way nicer. In order to limit exhaust leaks to a maximum we decided to weld it up where we could 😉 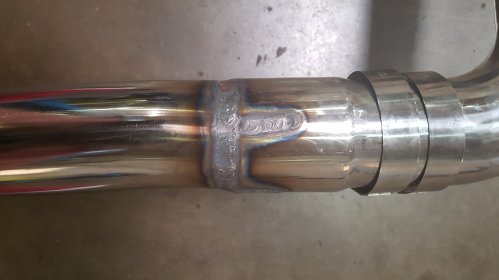 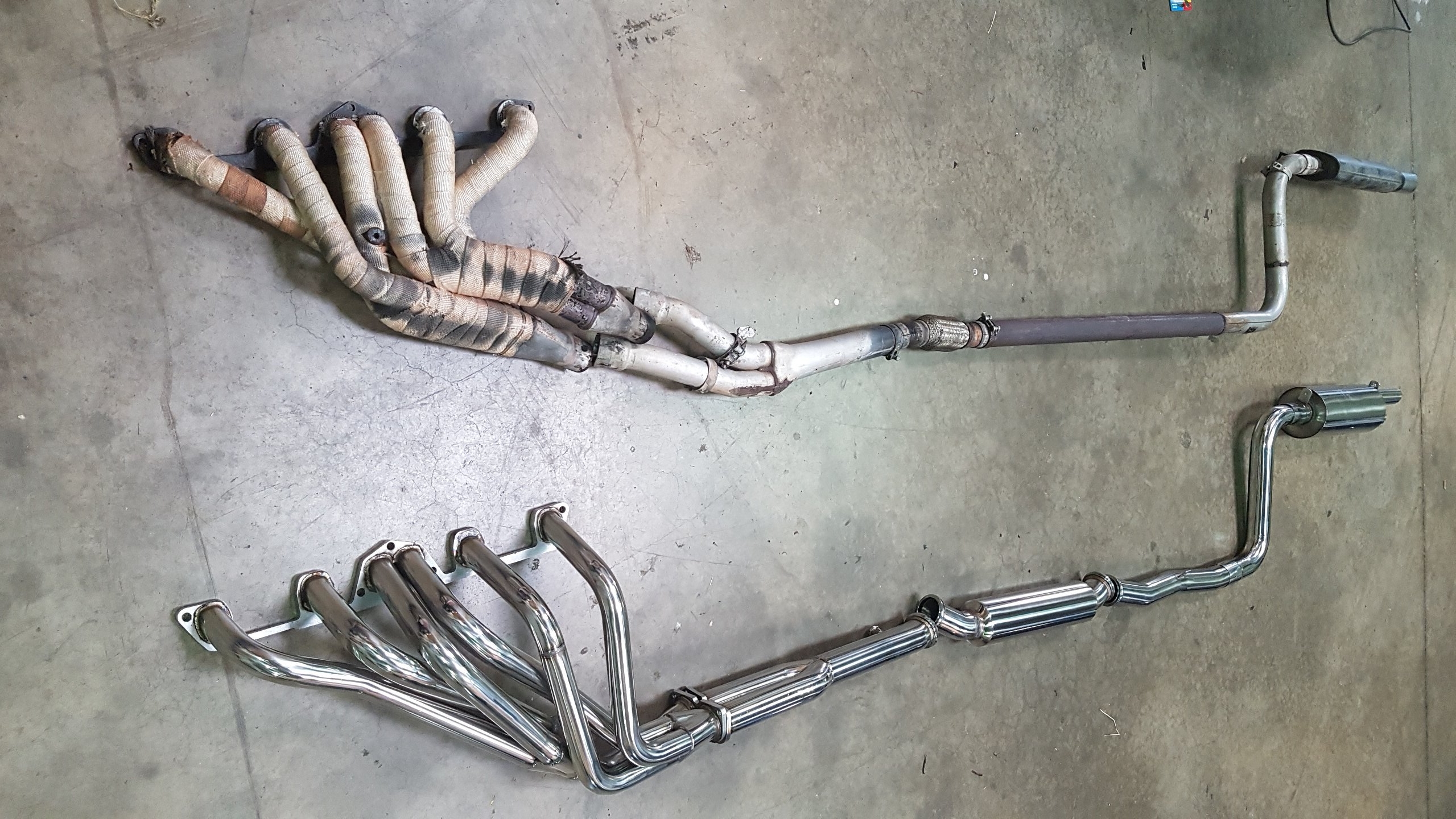 As I had to drain the coolant to remove the intake manifold to mount the header it was a good opportunity to flush the complete coolant system and even a better opportunity to change the tired old radiator to an aluminium Mishimoto radiator. As I wanted to stay with the mechanical fan on one side, but improve its effect I decided to fab a homebuilt fan shroud.

While cleaning the shed I even found the splash pan, which is rumored to improve cooling to. So I mounted this back up to.

Another addition are front and rear tow hooks from Zstory

And now wish me luck, I never drove more than 200km in one go, and now I’m trying to do 12 times as much in only 5 days. Let’s see if it can survive the torture. If it does, be prepared to see some super AWESOME pictures of these 2 Datsuns together in the Alps!

Sorry guys, but the blog is really running slow at the moment. But since I became a father, my free time is just way more limited. Owning 4 project cars (3 vintage ones and 1 track oriented one) doesn’t help either. I’m running behind on every single car.

The 240Z’s engine bay is finished and back together. At the moment I’m fighting a bit with my brakes. Might be the reaction disc in the booster. Have to investigate a bit further.

So we left with me DIY zinc plating parts. The finish is nowhere near professionally plated parts. But I love it and the fact it’s done by me is just satisfying. 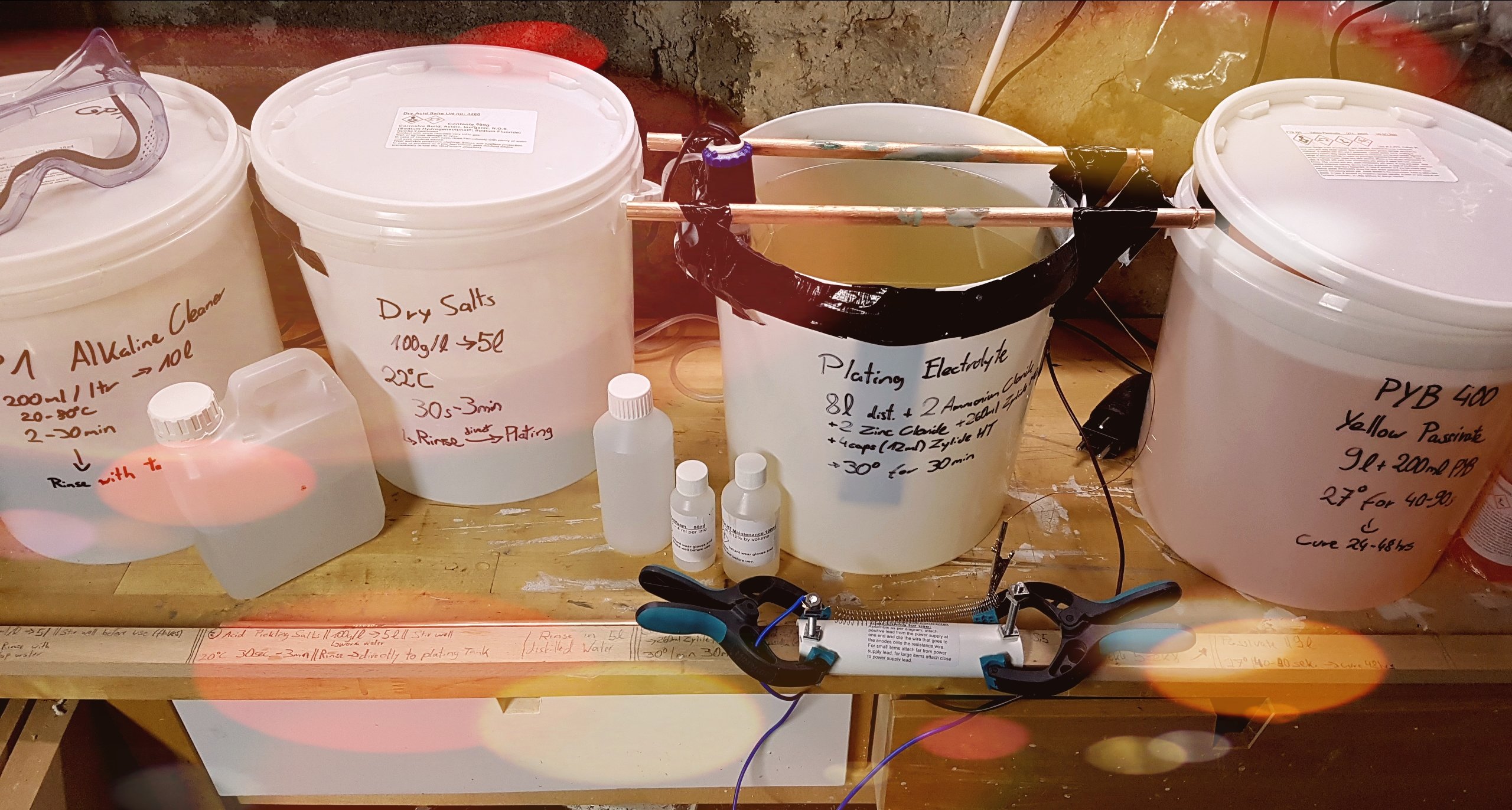 So after I chemically and mechanically stripped the engine bay, I treated some areas with rust converter (Kovermi) and later painted it in 2 layers of a 3in1 product for rust protection, primer and base coat (Brantho Korrux 3-1) 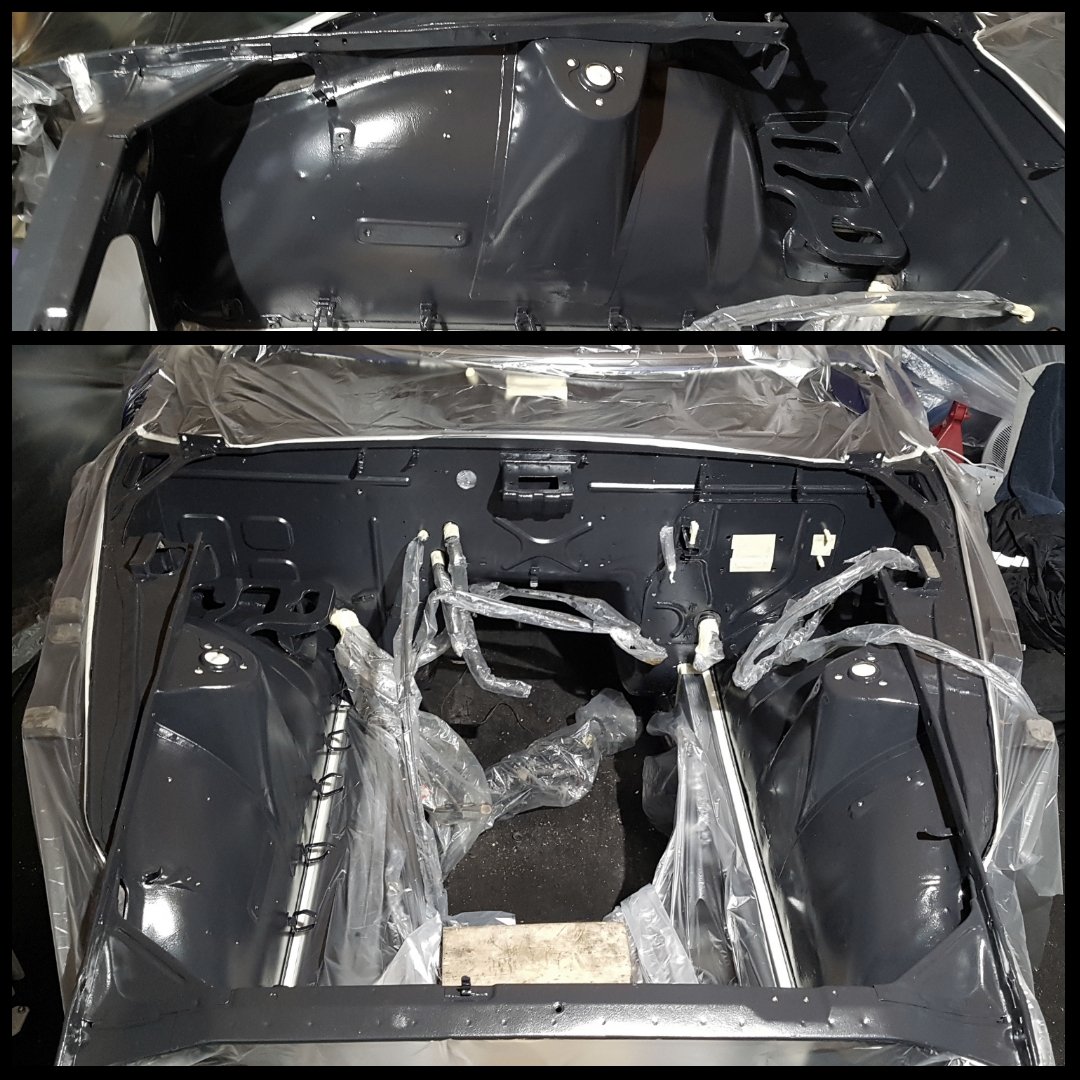 Once dry, I made my color choice. At first I was unsure if glossy black, silver, blue. But I decided to have it the same colour as the rest of the body, wich is Bahama blue #352 by Mercedes. Added a special clearcoat for engine blocks (KSD).

Some minor details have been addressed to: painted the airbox in factory orange, new rubber on the wire loom holders, cleaned the wire loom itself and wrapped it in new wire harness tape… 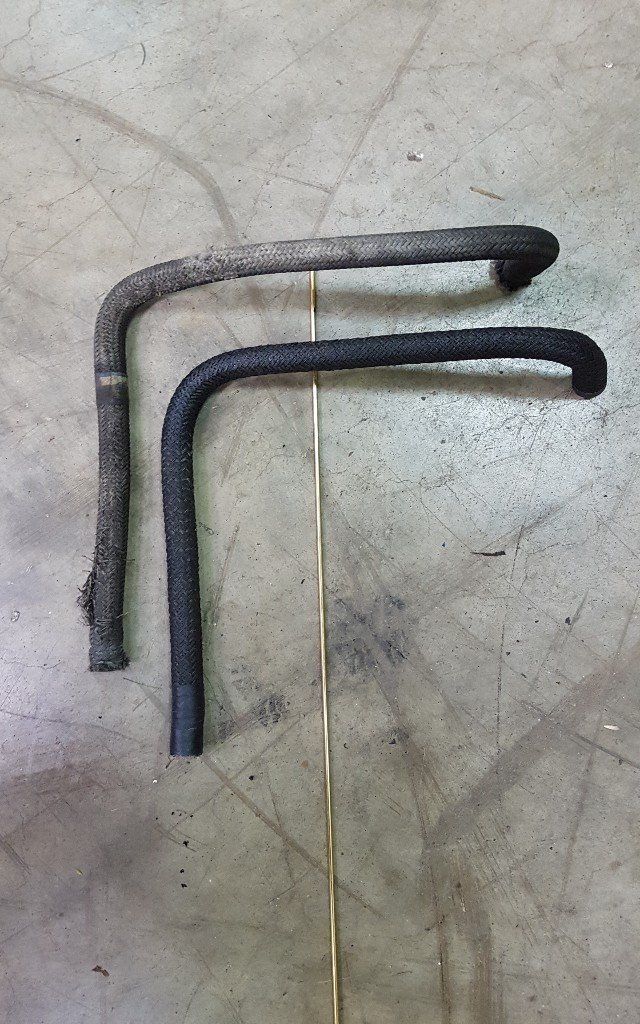 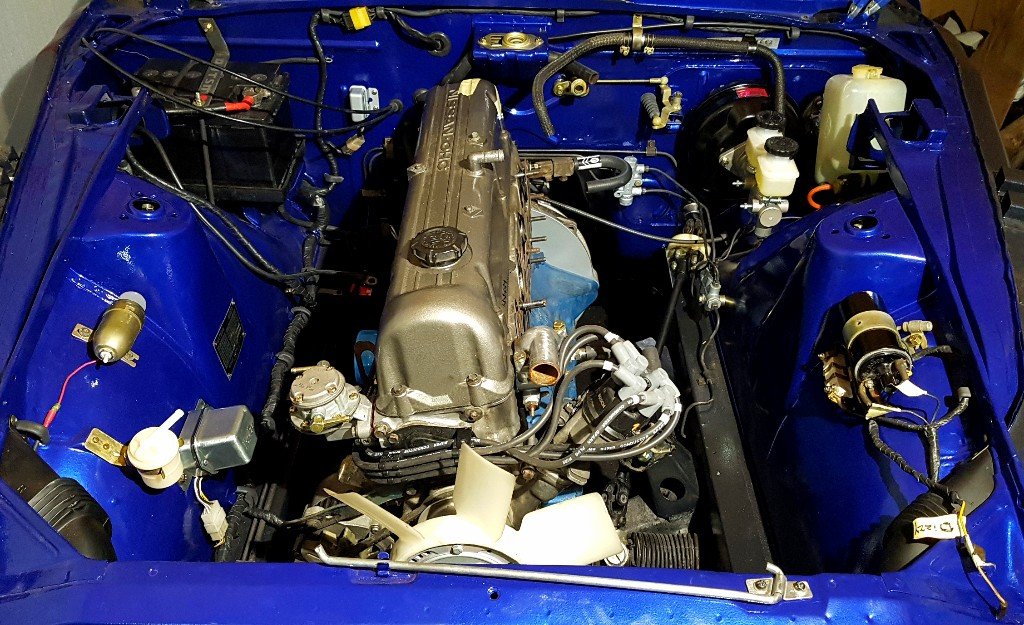 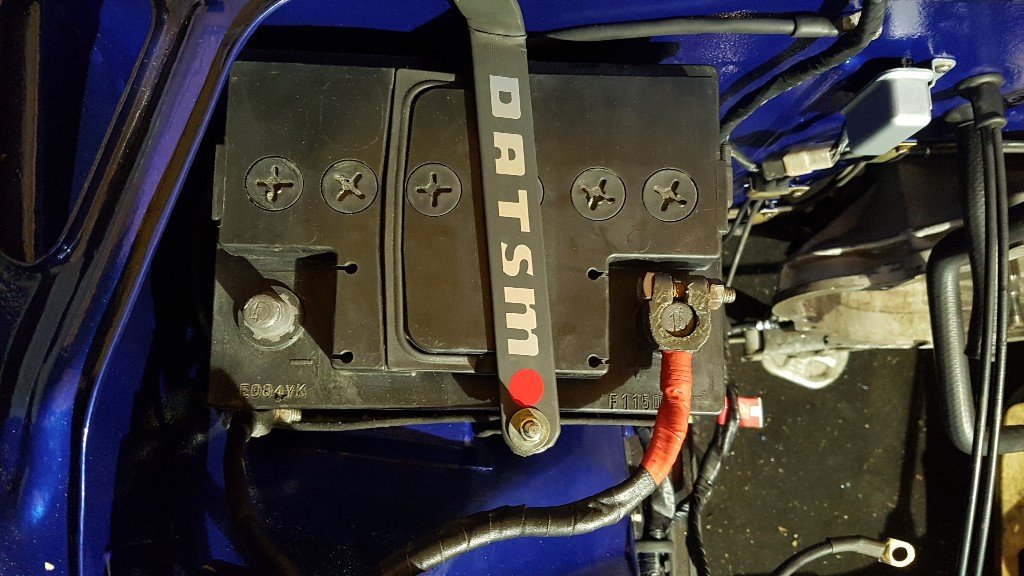 I will post a complete before/after picture in the near future. Here are the 4 major stages of the bay

And just for documentation purposes, the completed interior as it is at the moment. Still need to find a stock radio some day. Doesn’t need to work, just to nicely fill the hole! 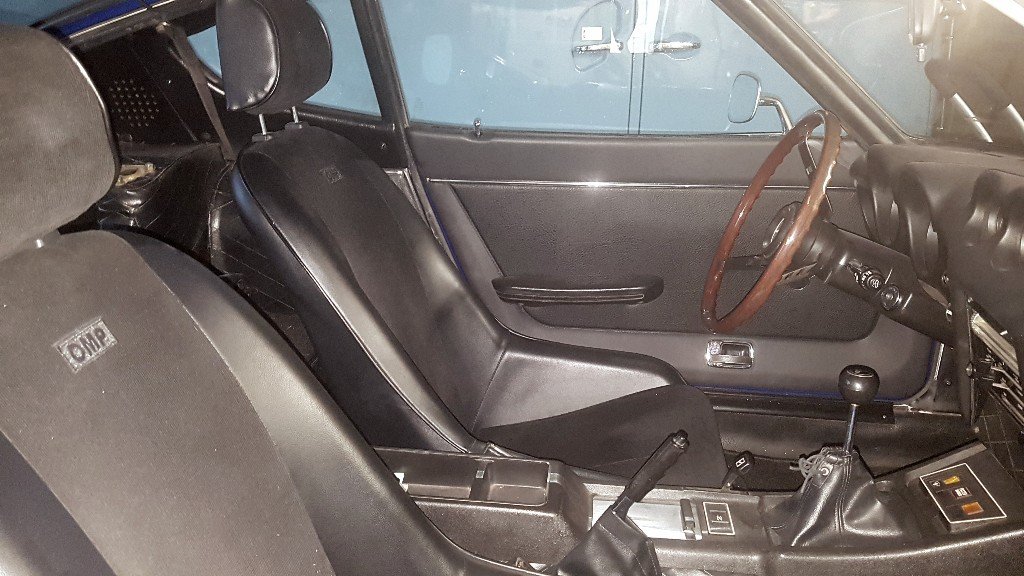 So why no real updates on the Datsun 240Z. Well what started as engine bay cleaning, escalated very quickly. At tje moment I started DIY zinc plating on bolts, brackets and stuff :-O